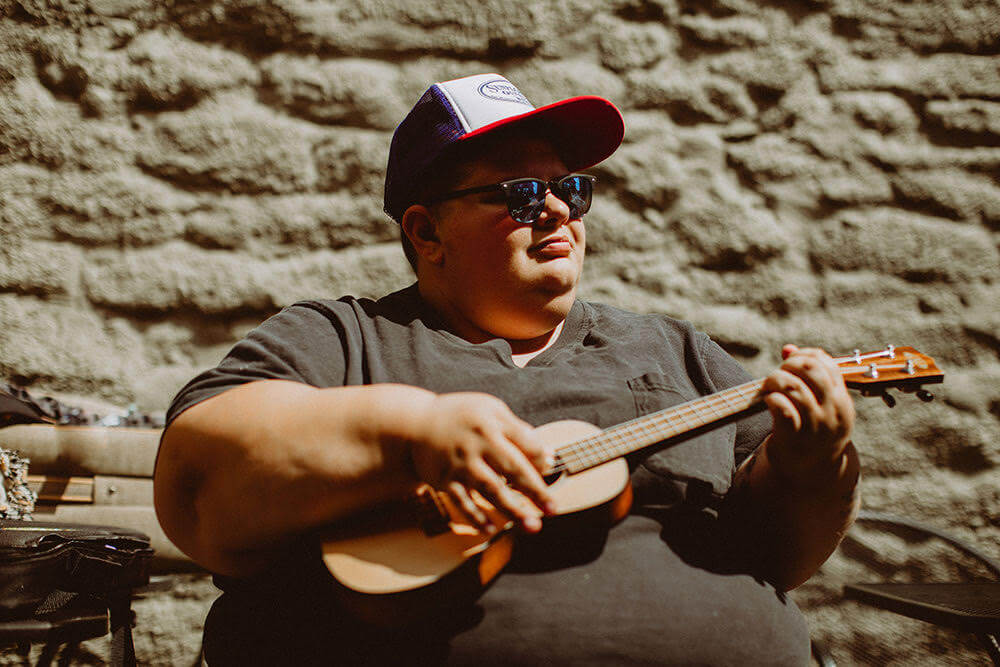 On this week’s episode, I’m talking to J of Comfy Fat, a non-binary fat activist dedicated to sharing resources that make life a little bit easier for plus-sized folks. J focuses on talking about the intersections of fatness and gender, fat accessibility, and body positivity/body acceptance.

In this episode, we cover:

How J Got Started

J began creating content 5 years ago on Tumblr, where the body positive movement began. They started by posting selfies, and quickly realized that people liked seeing their confidence. J enjoyed seeing people similar to them, which gave them the idea to start #comfyfat to spread the word that no one needs to conform to beauty standards, especially fat folks.

J’s main goal was to celebrate fat people in their sweat pants.

Not too long after, J started doing some Instagram work for Carissa, who wasn’t yet their partner at the time. Soon after moving in together, J realized that they wanted to do work that feels really meaningful and creative- which meant being a fat activist.

In the body positive world, people tend to start with self-love to combat the constant negative messages about what it means to have:

Whatever it is, we have to fight the negativity. To accomplish this, most people go full force into self-love- not just about your body, but about loving your personality, your traits, your worth, and knowing that you have value.

After self-love, body acceptance is the next step towards being neutral about your body. The goal is to know that it’s okay to not love your body some days, but instead of hating it, being neutral and constructive. That’s where J’s at now- radically accepting the body they have without letting the way it looks have any meaning.

The steps towards self-love need to be talked about more, since you’re not just moving on a linear trajectory. Not only is it not linear, you might also not get to the point of loving your body 100% of the time. It sets us up for failure to operate under the assumption that we’re never going to have bad feelings about our bodies or ourselves.

Most people have an image of what non-binary people look like. It’s usually a thin, white, masculine, attractive person.

When it comes to gender and being non-binary, J mentions that people constantly misgender them. At the same time, they also don’t expect the world to know about neutral pronouns and other options for gender. One thing we can all do is stop the constant gendering in all situations, and operate on a basic level of neutrality.

J’s experience is that fatness came first- their identity as a fat person didn’t start until they were out of college. Before then, it was just too much. J had to separate from their body, not look in mirrors, wear whatever oversized clothing they could, and basically just get by. This isn’t sad – it’s what helped J get through hard times.

It wasn’t until they were out of those situations that they could dive in and dig deep.

J knew that something was off about being perceived as a woman. It didn’t resonate with them- it felt uncomfortable and dysphoric. This means that they felt at odds about the gender they were assigned at birth, how the world is treating them, and what it’s calling them. Sometimes, it’s related to body parts, and sometimes it’s not. For J, it was related to presentation and how people see them.

Taking up space & accessibility for all

Getting comfortable with taking up space is both physical and mental. This is why even people who do lose some weight from diets still have issues with their bodies- the notion that you have to be small to be worthy in this world is still prominent.

J remembers the first time they felt they could finally take up space. They were thinking about public transport and how it terrifies them, in terms of:

They realized there was no law saying they can’t take up space on the bus. J had been living their life like there was a law. Although there are definitely policies that oppress fat people, there’s no law.

Since then, J tries to remember that every time they feel like they need to shrink or leave, it’s because that space was not made for them. Remember- you’re allowed to be here, and you’re worthy of whatever resource you’re trying to gain access to. You don’t have to hide in your house until you’re a certain size.

When people come back at them by saying they should lose weight, that logistically means that fat people aren’t supposed to: eat anything, wear clothes, get in the car, leave the house, lay on a bed that can withhold them, or do anything until they’ve lost hundreds of pounds. That’s not the way anyone should live their life, but that’s how J was living before- thinking they had to hide away.

Now, their thinking is:

That’s something they’re still struggling with, especially when some places still don’t work for them. It’s about learning to put the blame on the space as opposed to on them. If the space were designed the right way, it would have space for everyone.

I spoke with J about two articles they wrote on ComfyFat.com:

They were kind enough to share some of the tips for flying while fat with the TYBP audience.

J starts off by saying that they only fly Southwest Airlines because they have a Passenger of Size Policy. All of the employees are up to date and know exactly what that policy means. For that reason, fly with Southwest if you can. You will know for sure that it’s the most accessible flight.

Easing anxiety before your flight is one of the most important things- do all the prep you possibly can to help prepare yourself. Here are some of J’s tips for flying comfortably while fat:

Does getting an extra seat mean someone will get kicked off the flight? That has never personally happened to J, but it can mean that someone might need to move to another flight if it’s full. That doesn’t mean you need to get rid of your second seat- it means that someone else moves.

When you’re in the airport, sometimes you hear staff asking if anyone is willing to change their flight because it’s over packed. That happens all the time- people move flights for various reasons. It’s not as scary as it seems at first. It’s not anyone’s fault except the airline that booked too many people.

Even if you know these policies, there’s a difference between knowing it and applying it. It’s much different to be in it and have everyone around you potentially seeing that you’re taking up an extra seat. Practice makes perfect. The more J has been able to execute this, the more they’ve built their confidence, but it’s hard in the moment. Just put your headphones on, stare out the window and keep telling yourself that you’re allowed to be here.

Finding a community and feeling seen and celebrated as a fat person begins with taking risks. Start with risks that are safe- you don’t need to push yourself to a panic zone. You can take healthy risks by:

If you think other people are amazing for putting themselves out there and doing something different than the mainstream, there’s no reason why you can’t do the same!

The idea that bigger bodied people are looked at differently, simply for existing, is the hardest thing.

For example: in restaurants, people don’t only make looks, but they will turn the conversation to weight loss and fatphobic comments. They’re clearly bringing these up because that’s what they thought of when they saw J.

Knowing that other people’s facial expressions are saying what their words aren’t makes J feel like they shouldn’t be there; they feel like they’ve failed. That’s the thing about microaggressions- they come out in facial expressions, conversations and day-to-day stuff. Even if they’re small, they’re indicative of something bigger.

J is a nonbinary, fat activist, and the founder of Comfyfat.com. Comfy Fat is a site dedicated to sharing resources  including clothing and products that make life a little bit easier for plus size folks. The site is also used for talking about the intersections of fatness and gender as well as fat accessibility.