Being Honest about Disability with Anna Sweeney, RD, CEDRD-S 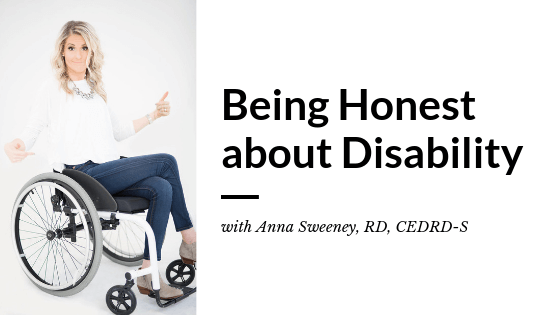 Being vulnerable is the ultimate sign of trust. There is nothing more vulnerable than openly discussing your eating disorder or disability on a podcast, and that’s exactly what Anna Sweeney is here to do this week! You may know Anna on Instagram as @dietitiananna– she’s a Certified Eating Disorder Registered Dietitian and the owner of Whole Life Nutrition, a practice dedicated to the treatment of eating disorders.

Keep reading to hear about Anna’s story and how we can bridge the gap between the able-bodied and disabled worlds.

In this episode we talk about:

Anna was diagnosed with MS when she was 12 years old. In the last 4 years, her condition has moved from relapsing/emitting MS to secondary progressive MS. Since then, she’s gradually acquired more and more disability. She describes it as a humbling process; there are days she wakes up and there are things she can’t do, but the next day she can do them again.

For Anna, it’s both a mind f*ck and a gift, since it has forced her to slow down and listen to her body. She’s taking it as a message from the universe that she needs to chill out.

Anna didn’t really start talking about her disability out loud until 2017. She was at the IADEP conference and she was in a scooter- this is where she experienced feeling invisible for the first time.

She remembers feeling mad, heartbroken, and devastated. Most of the conference was spent sitting in the back row because she didn’t want to interrupt anybody with her scooter. This horrible experience changed the way she thinks about disability, and it’s what got her started talking more about it. Shortly after the conference, she went on Christy Harrison’s Food Psych podcast to talk about this unique body image experience. She also had her first photo shoot with mobility aides.

Anna believes it is her honor and responsibility to talk about her disability; what she’s learned as a disabled person are things she never would have learned otherwise. Her intention in sharing her vulnerabilities is not to put her problems on other people, but to connect to even one person who identifies with her story.

As Anna loses strength in her disability, she becomes more powerful as a human.

She’s not looking for feedback- she’s looking to share human experience. She wants to be forthright, honest, and genuine in the things that she shares.

Anna gets told all the time that she’s super inspiring- she says she’s not. She’s just living.

Coping With The Reality Of Disability

When Anna was newly disabled, she says she was a total jackass. She was so vocal, she would talk so nastily about her body, and she projected her anxiety onto other people. If she said the mean thing first, then no one else would say it, feel it, or think it. It was self-protective- she felt like there was nothing else she could do.

A lot of people can relate to that on some level- even if it’s not from a disability lens. When someone has body image issues or an eating disorder, self-hate comes up as a mode of protection. The thought process behind it is that if you hate yourself first, then it protects you from the judgment of everyone else.

There was a point where Anna realized her negative self-talk wasn’t helping her move forward. So, she started a shit-talk jar.

Every time she negatively talked about her body out loud or had a negative thought, she would put a dollar into the jar. She ended up donating quite a lot of money to a local eating disorder organization. From that, she’s learned to not talk shit about her body anymore. It probably had nothing to do with the money- it was more about the action of identifying her problematic behaviors.

Nothing positive comes from speaking negatively about our bodies. Doing that wasn’t going to make her less disabled. It was only reaffirming her feeling LESS comfortable in her body by making it public and loud.

Slowly, she learned to accept her body for what it is.

What’s Missing From the Disability Conversation

Anna wants you to know that she is not a disability expert- she is an advocate who can only speak from her own experience. She lives with a lot of privilege, and she hopes she can do the disability community justice.

Anna has had a several people reach out to her and say their disability has prevented them from getting proper care for their eating disorder. She can’t even image the number of people we aren’t reaching because treatment facilities aren’t accessible. We live in a world that should be made for everyone.

Often times, what people think is handicap accessible actually isn’t. Anna talks about a conference she went to a few years ago- she stayed in what was supposed to be an ‘accessible’ room, but the step to get into the shower was 6 inches high. Recently, she was at a dealership using her wheelchair to get around- when she went to the accessible washroom, there was a weighted door that she had a very hard time getting into. Even if the stall is accessible, if you can’t get into the actual washroom, it’s not helpful. NOTHING about either of those situations is accessible.

Anna says that she’s at a point where she has no problem asking for help. If she has to plug in a lamp in her office, it might take her 5 minutes. If she had to move a couch, it would probably be impossible. So, she asks an able-bodied person to help. It is such a small ask, but it makes a really big difference in her life.

It’s important for us as humans to recognize how much we need each other and how OKAY it is to need each other. There’s no part of her that enjoys the fact that there are things she physically can’t do anymore. She knows it is an extraordinary privilege to challenge herself to ask for help, which she’s a lot better at doing now than she used to be. Anna has been asking for help more recently, and guess what- nothing bad has happened. In fact, she’s had her needs met. That’s incredible.

This isn’t exclusively for disabled people- humans like helping other humans. It takes a lot of strength to ask for help and consistently ask for what you need. There are varying degrees of how/when people are available for help, but human interaction is really integral for survival. No person is an island.

The more we can count on each other no matter what, the better off we’ll be.

How Disability Has Impacted Her Relationship

Anna says her partner has been able to anticipate things being challenging before they’re actually challenging. She recently went with her husband to Ireland, and he got a wheelchair for her before she even needed a chair. He has been super present, helpful, and she knows that she would do the same for him if the roles were reversed.

Anna is blown away by how adaptive and accepting her husband has been, because her life looks really different than it used to. She has a little guilt, but also feels extraordinary responsibility to continue doing her job, to do more, and to do better to make up for being less able in other areas of her life (although that’s something she’s working on).

Her husband is older than she is, and has had a life before her. She feels that if she had married someone who was also 33 like her, she doesn’t know if it would have worked out in the same way. He would say that they’ve had the same relationship they’ve always had (although she says that’s bullshit). In a lot of ways, Anna says they have a better relationship than they had before.

This post was transcribed and edited by Brittany Allison, Intuitive Eating Counsellor. You can find her on Instagram @thefoodfreedomlife.

The links above may contain affiliate links. Using affiliate links helps me earn a percentage of any purchase you may make on that website, and those earnings will be used to improve my production.